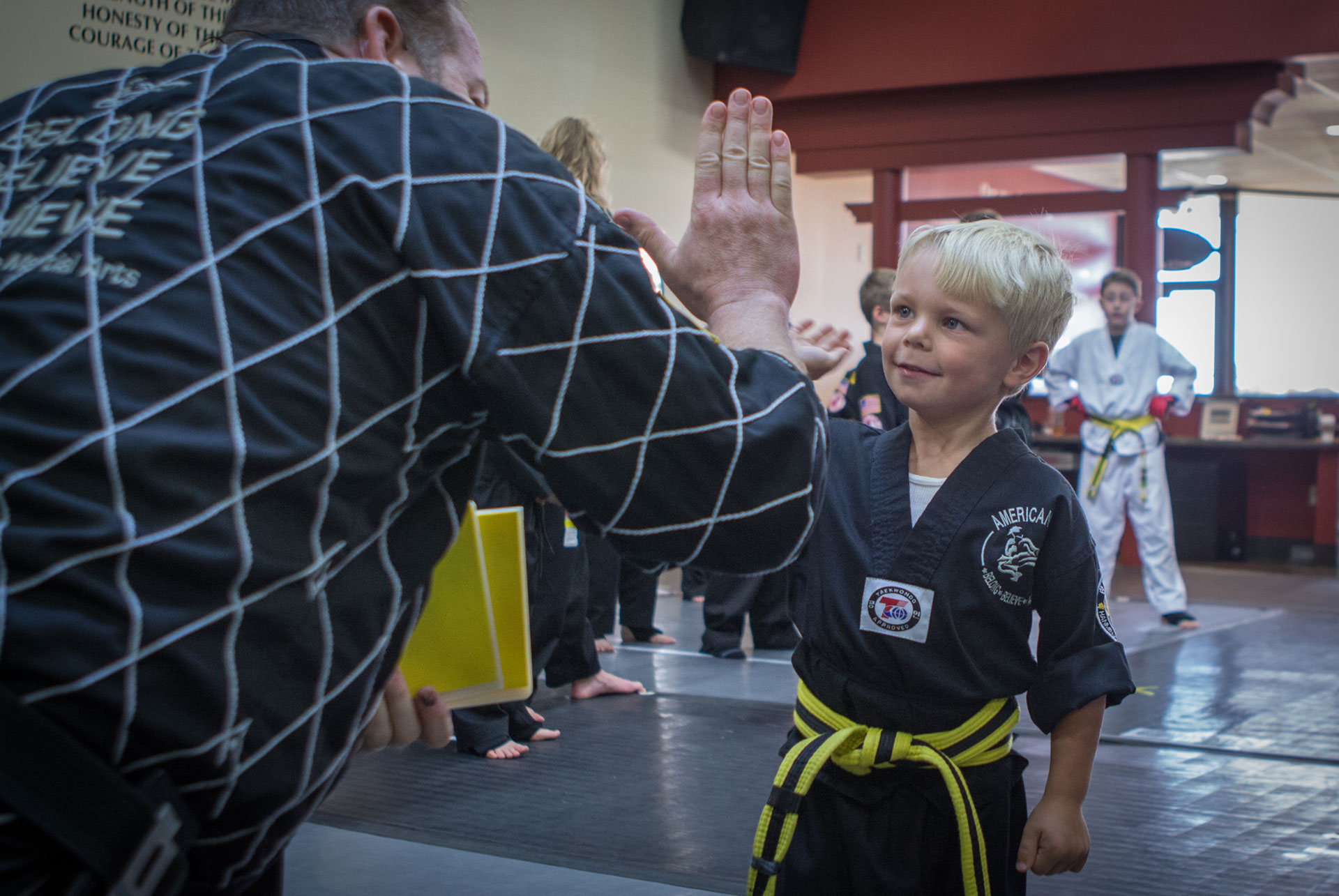 American Dojo was founded by Dean Konley in 1994, out of his desire to share the life-changing power of martial arts with families and individuals in the Waukesha county area.

As a troubled youth of 14, Dean sought out martial arts as a means of gaining the type of success & accomplishment he had failed to achieve in so many other areas of life. As a child, he struggled with dyslexia. He was ridiculed by his peers for his inability to read and misunderstood by his teachers. A turning point came for him when he enrolled in a local Taekwondo academy. Dean’s life began to change. Not only had he found a place to BELONG, but he had also found something he could truly excel at. He had found mentors who were imparting to him the discipline, self-confidence, and respect for himself & others that he so desperately needed. These mentors believed in him, and he was beginning to BELIEVE in himself.

Dean ACHIEVED his first Black Belt in 1986 and began teaching classes at his instructor’s school. Not long after, he graduated from high school and continued his Taekwondo training into early adulthood. It was at this time that he began exploring other styles of martial arts as well, including Hapkido and Jiujutsu. His passion for sharing martial arts with others became so strong that in1994 he founded American Dojo in Waukesha with virtually no capital, but loads of sweat equity. His martial arts experience had taught him well the value of resolve, perseverance, and hard work.

Master Konley has worked to develop the successful academy, highly qualified staff, and dedicated student body that they enjoy today. They have established the vision for American Dojo of “BELONG, BELIEVE, ACHIEVE”. This vision is central to all that the Konleys and their team does. It is driven by Master Konley’s personal experience and the experiences of countless others whose lives have been enhanced and empowered in the pursuit of Black Belt excellence.

Master Mitchell Collins is a passionate martial artist that started his training at American Dojo when he was just 7 years old. Mitchell saw martial arts as a way to embody his favorite on screen heroes, the Power Rangers. His parents, however, knew that martial arts were going to provide him with much more than ninja skills. As an only child, Mitchell had mild problems with attention and needed to learn how to handle himself both mentally and physically. As soon as he broke his first board and learned what he was capable of, he was hooked. American Dojo provided a welcoming community and a support system. Several years later Mitchell received his black belt and Master Konnley noticed that Mitchell not only had a love for learning more about his art but also enjoyed reflecting that knowledge onto others. It was then that he was invited to join the Certified Instructor Training program. This path was not easy for Mitchell, who was now a teenager. It was becoming difficult to press onward having already achieved the rank he had. He was always told, however, that there is always another level; something more to learn, and his parents were not ready to let him become a quitter. Mitchell then grew his passion into his forms and weapons training. It was not uncommon for Mitchell to walk into the dojo with a new exotic weapon to show off to Master Konnley, who would just smile and nod wondering how he came into possession of an arsenal of weaponry.

Master Konley founded American Dojo in 1994, out of a desire to share his passion and the life-changing power of martial arts with Waukesha area individuals and families. Starting a business from scratch with almost no capital was not an easy undertaking, yet with his hard work, determination, and big heart, he was able to develop a dedicated student base.

With each training session, our family-oriented approach challenges the individual both physically & mentally. Meanwhile, we inspire at the heart level with our exclusive Dojo Virtues curriculum…. seeking to impart positive character traits like Focus, Respect, Perseverance, while empowering parents with tools to encourage follow through in the home, at school, and out in the community.

Our programs are systematic & time-tested, our methods innovative. As an organization, we are service driven. We want to earn your business each time you walk into the Dojo…. it keeps us constantly improving, always seeking to get better at what we do!

Secure your spot and get started today with our EXCLUSIVE offer! 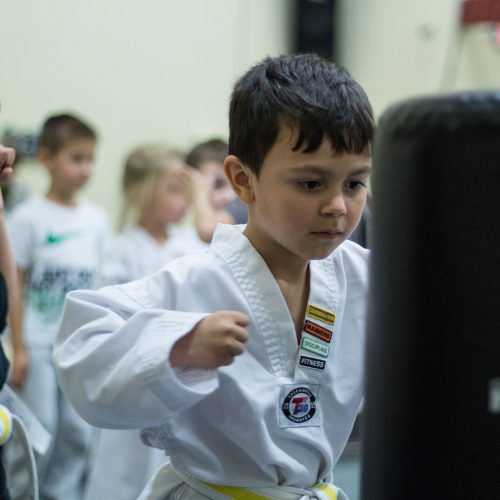 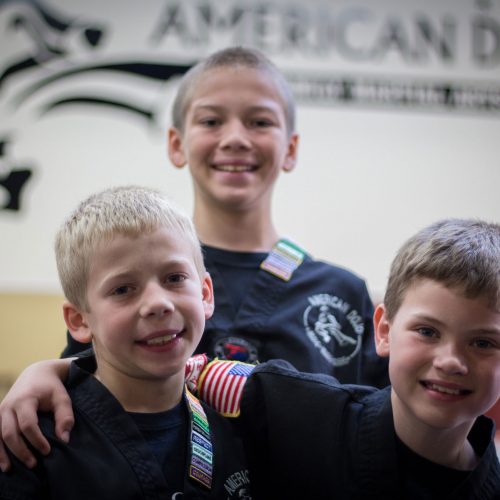 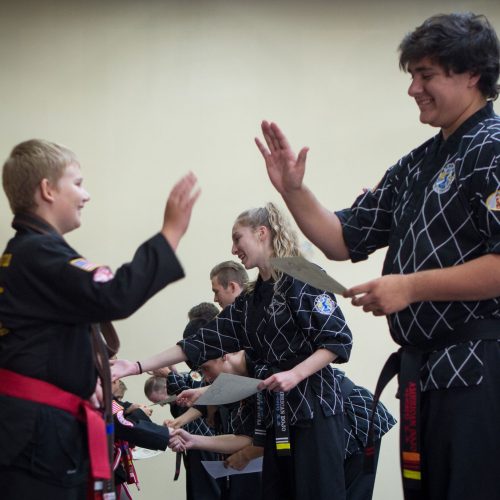 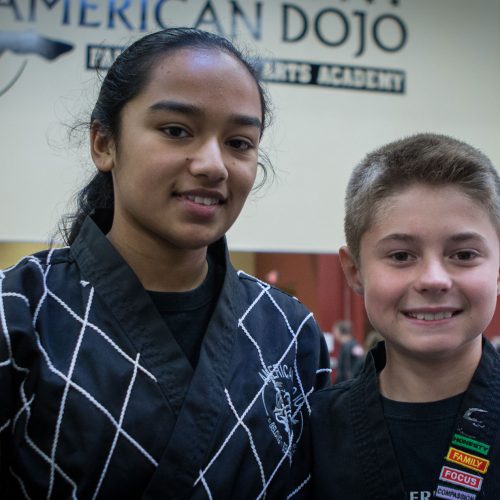